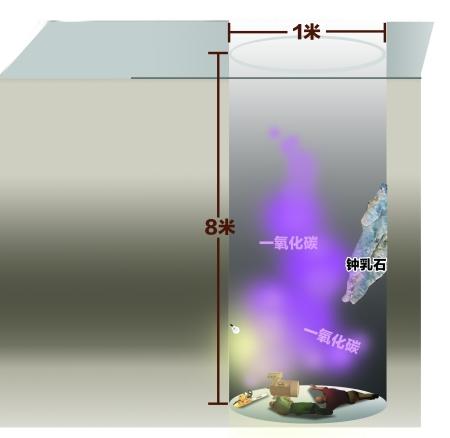 time: on May 8th afternoon 3 when

the accident: father and son with the generator and a chainsaw into the cave, DaoGe stalactites, emissions of carbon monoxide poisoning for generator.

on May 8, wushan driving a car, a boy and his father with the generator and power saws, enter WuXi DaoGe within a cave stalactites a two meters long. The next day, father and son were killed in local villagers found in the cave. Police preliminary appraisal, father and son of carbon monoxide poisoning death. Stalactites reporter survey found that although the business is illegal, but many people still desperate in profiteering driven, cave stalactites inside in the whole city was DaoGe phenomenon is more serious, the legal protection is still a blank, is pushing legislation to protect.

the cool breeze village status in wuxi tong town. Yesterday, the town a chief introduction, this father and son of poisoning due to steal stalactites surnamed xu, father this year 59 years old son, 30 years old, they used to be a cool breeze village local villagers, about 10 years ago, the family moved to wushan county.

cool breeze village director lee told reporters in the PI, May 8 at 3 p.m., hsu, father and son is driving a car back to the cool wind in the rain in the village of relatives, and then with the generator and saws and other tools, around looking for karst cave, ready to go in DaoGe stalactites. Later, father and son came to a road about 100 meters from the cave, get down after looked inside drill to go in.

& other; Passing the villagers saw, don’t hesitate to call me to report & throughout; , lee said in PI, then he catch the past, to dissuade them, asked them not to cut stalactites, but they didn’t listen.

& other; That the hole diameter is about one meter wide and deep hole about 8 meters, there are very few in the & throughout; , in PI li said, in the end he dissuade you don’t succeed, had to his home.

the day after dark, the name of xu relatives see father and son didn’t come home, to the mountain to look for some of the cave edge, the result is not found. At 5 PM the next day, xu relatives went together looking for villagers. Around 8:30 in the morning, was found in a cave and an umbrella, leaned toward the hole shout, vaguely hear the sound of the generator, but no one reply. The villagers found the hole under lights, father and son on the ground motionless, then dial 110, 110 and 120 report to the police.

wuxi county public security bureau Interpol brigade rushed to the scene after the investigation and preliminary identification of father and son died of carbon monoxide poisoning, its source is diesel engine exhaust gas. According to field investigation of a civilian police, father and son is a trebuchet generators and electric saw, a piece of about 2 meters long stalactites have been sawed in half. From above into the hole after, he said, here are can only hold a person crawl into a small hole, when the diesel generator is near the mouth of the cave, preliminary analysis after the creation of carbon monoxide, air circulation, father and son was poisoned.

after the incident, local fire carrying oxygen tanks, the rope tied with the lamp, the hole will be xu bodies of father and son to pull up.

artificial rockery demand up to 40000 yuan a piece

after the accident, many local villagers whispering, what prompted xu father-son adventures under the hole cut stalactites? Had the villagers said, cut stalactites of things is not new in local, because & other; Stalactites can sell a good price & throughout; .

yesterday, the reporter did a survey for zhuhai trading natural stalactite, found stalactites trading on the market at present is frequent, merchants said to hundreds of yuan, the highest price of 40000 yuan.