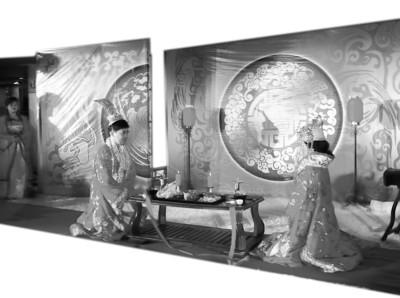 covered with the screen of the phoenix, there is food & other; A few & throughout; , playing the guzheng & other; Maid & throughout; , a couple, long sleeve, and bending down upon & hellip; & hellip; This is a movie on the set? No, it is read Dr. Luan guy Chen Dan and chengdu girl Zhang Tiantian wedding.

with the ancient melodious music, six skirt the maid is lantern, & other; Master of ceremonies & throughout; (MC) solemnly chanting: & other; Such as Gao Shanzai, their love forever; Hao, such as sphere, the affection of ten thousand generation & hellip; & hellip; Throughout the &; Red curtains slowly lifted, the couple dressed in red hanfu, wearing a tiara, in & other; To return to the han and tang dynasties & throughout; The musical sound, walked the red carpet of palace lantern, slowly into the hall.

in & other; Master of ceremonies & throughout; Under the guidance of the two & other; Maid & throughout; Water use antique vessels for new people to wash their hands, symbolizing in clean body and mind into the sacred ceremony, namely & other Walter washing ceremony & throughout; .

later, the couple sitting opposite to broken & other; A few & throughout; Symbol on the prepared three food, will in future life together, called & other; With firm li & throughout; . And then the & other; GeJin ceremony & throughout; , will be a complete gourd cut in half, tied with a red line, gourd, the wine is a bitter gourd, the wine is bitter, the bride and groom drink GeJin wine, not only a symbol of the husband and wife since the wedding together, forever good, also the significance of husband and wife share the joys and sorrows.

in the sight of the traditional and new wedding, guests will forget food, camera, mobile phone records every scene in succession. & other; Those of us who attend the wedding of what can be learned that & lsquo; Your loving husband and wife & rsquo; . Throughout the &; The friend of the bridegroom Mr Li said. Relatives and friends to attend the banquet He Defen also therefore had do wedding so with the idea for his son.

regarding luan folk artists association chairman Shi Gongyu believes that the wedding broke through the conventional, compared with those splendour, the luxurious wedding, one of the cultural elements can infect more guests at the scene.