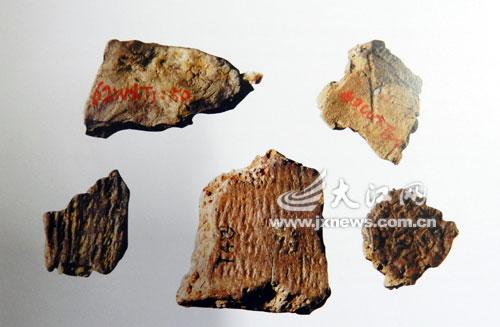 yesterday, the reporter learns from the provincial archaeological institute, Beijing university professor zhang xiao-hong wu, professor at the school of archaeology wenbo and colleagues published recently in the American journal of Science, such as about the article “fairy cave sites in twenty thousand pottery in China”, confirmed ten thousand fairy cave pottery in time to 20000, this is now the world has been found that the earliest pottery s. & other; The study is by Peking University joint provincial institute of cultural relics and archaeological institute of wenbo, wannian county cultural relics departments, Harvard University, Boston university archaeologist and cooperation with the United States. Throughout the &; Provincial archaeological institute FanChangSheng said the results of the study are to explore modern human behavior and mechanism of the emergence and spread of a particular civilization elements provides important information.

fairy cave sites located in wannian big source township, located in the northeast of jiangxi limestone hilly region of a mountain basin. FanChangSheng said that as early as the early 1960 s about site before large-scale excavation, in 1993 and 1995 by the china-us joint archaeological excavation was carried out on site twice. Later in 1999 by the provincial institute of cultural relics and archaeological wenbo and Beijing university institute discovered again. Successively five times excavated a large number of pottery, stone, bone artifacts, clams and other artificial products and animal bones, which early caused academia concern for emergence of pottery. Due to the academic circles is generally believed that the emergence of pottery with the invention of agriculture, sedentary lifestyle and so on, and these activities are accompanied by the arrival of the warm period of holocene, so think the pottery earliest time basically should be around ten thousand years ago. At the same time as a result of the early pottery preserved pottery is scrawled and precious, can’t extract the age determination of residual organic matter in direct inside.

2003-2003, china-us joint team in dao county in hunan province jade toad rock site archaeological excavations, collected samples of carbon 14 dating system, accurately record the unearthed pottery and its relation to the formation of dating sample, formation sedimentary microstructure analysis method, the jade toad rock site early pottery unearthed in the age determination of the system, and determine the site of pottery in time about eighteen thousand years ago. Based on the accumulation of research, in 2009, Beijing university and Harvard University cooperation team decided to the fairy cave pottery in ten thousand s problems for further research. After approved by the state administration of cultural heritage, the provincial institute of cultural relics experts and Beijing university, Harvard University scholar, on to sort out the archaeological strata profile collected series of carbon 14 dating sample’s microstructure and strata, determine the carbon 14 dating relationship when the samples and the formation of pottery, confirmed previous unearthed archaeological strata are human activities form of primitive accumulation, there is no late natural processes or activities, the determination of carbon 14 s represents a pottery tree s. Confirmed the fairy cave site unearthed pottery s early 20000 years ago, is now one of the earliest s published pottery in the world.

FanChangSheng said, was at the last glacial ice, accurate determination of the early pottery s overturns the traditional pottery is warm period comes after appear in the new point of view, and to study the strategies of modern humans respond to environmental changes and the role in the evolution of human society development problems such as pottery provides important information.

triggered a letter to the fairy cave excavation

FanChangSheng said that as early as October 26, 1961, the original culture in jiangxi province received a letter from the reaction about cultural relics. Write a letter is the original cadre Long Jun jiangxi provincial party committee of political science and law department. In the letter, Long Jun says, oneself after watching the movie “the origin of life”, think of township in wannian Chen camp big source source near the village has a big stone mountain, a giant natural caves in the mountains. & other; The inlet has two caves in the door height to width, hole is wide and smooth, can accommodate five centuries. Throughout the &; Long Jun, according to his/her original work in the local, to the hole, in a few times also didn’t dare to go. According to the local people, animals such as pig shape of rock, though he himself didn’t carefully read, but I don’t know whether there is archaeological research inside the hole.

& other; This letter is to attract the attention of the archaeological experts in our province. Throughout the &; FanChangSheng, said that after this clue, the provincial institute of cultural relics and specifically to look: and, behold, immediately and contact the state administration of cultural heritage on a large scale, the oldest bone artifacts unearthed a large number of instruments, polished stone, cut clam and bone the notebook, discovered the earliest known in the world of cultivated rice planting silica specimens and the earliest pottery known to mankind.